Having enjoyed using the Balda Baldinette so much I thought I would try another rangefinder, the Voigtlander Vito CS hailing from the late 1960’s. Am I entering the ‘rabbit hole’ of rangefinders? 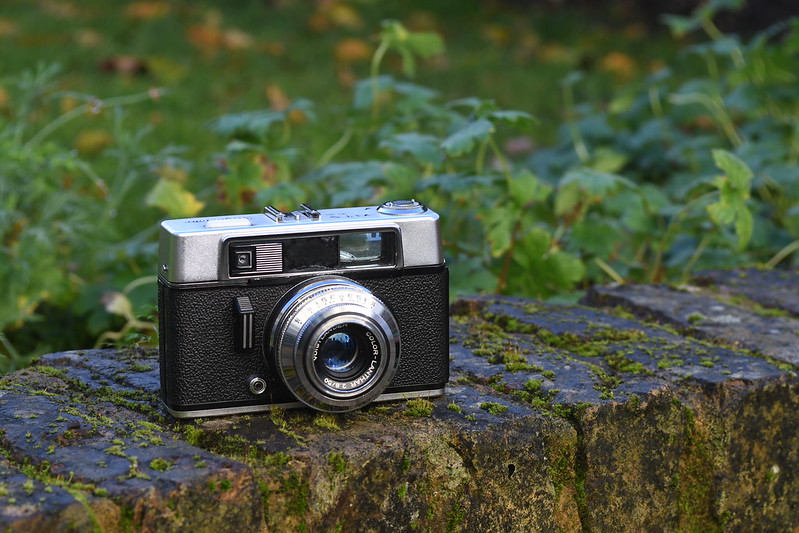 Looking next at the top plate of the camera. On the left is the film rewind with built-in film memo, white for black and white film, blue for daylight colour film and finally yellow for tungsten balanced film. The film rewind is popped up by means of the little lever situated on the back of the camera. The arrow seems to point to it and the direction in which to rewind a film. Surely it could have been simpler to have a flip out rewind crank? Then there is the cold shoe and finally the light meter window. 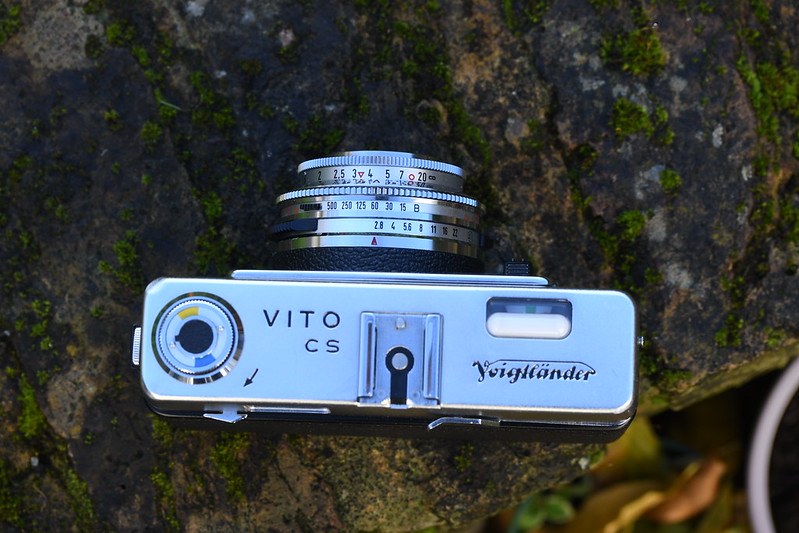 Zooming in on the meter window on the right. The green stripe is for testing the battery that is needed to power the light meter. When the light meter is active a black needle can be seen and all you do is match the green needle to it by changing either aperture or shutter. I found this external window incredibly useful as I wasn’t always able to see the meter in the viewfinder. 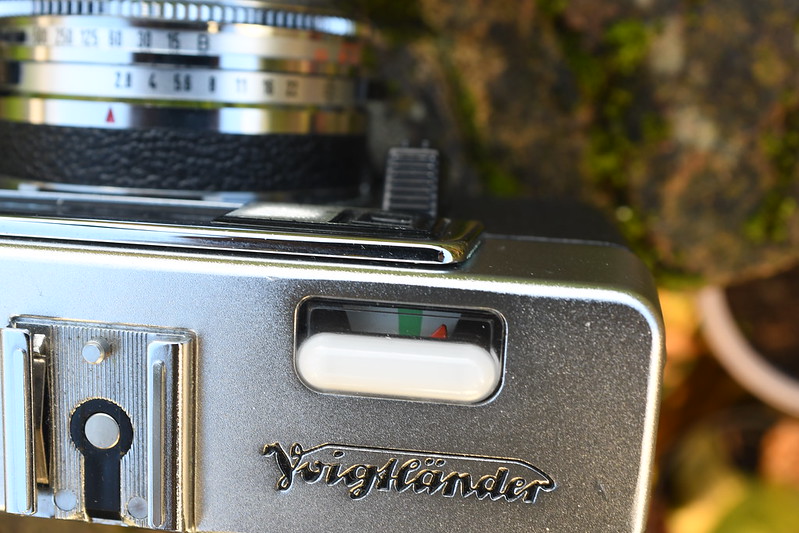 Talking of the viewfinder. You get a very clear reasonably bright one with the Vito CS as illustrated below. The two short lines situated at the top of the viewfinder are for parallax correction when taking pictures up to 2m away. To the right of the main viewfinder is the light meter window. If you get the black needle between the two green lines you have correct exposure. As I mentioned I couldn’t always see this window no doubt due to my wearing spectacles. 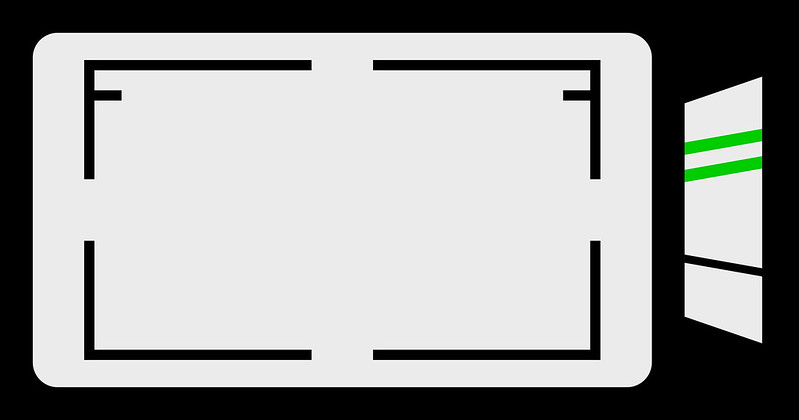 The lens houses the aperture, the inner ring, which in my model moves freely without clicking into any aperture setting. I don’t know if this is a fault or if it is normal behaviour for this camera. A nice set of black plastic ‘handles’ are provided to move the aperture with thumb and forefinger.

The shutter is the second ring moving out from the camera and has speeds from B to 500. You’ll notice a black plastic ‘key’ by the 500, that allows you to unlock the film speed dial on the same ring but on the other side of the lens.

Finally, the outer ring allows you to focus the lens. Do you notice a red O between the 7 and 20 and a triangle between 3 and 4 in the image below? There is a third red dot before the 2 which is out of view. Now please pay attention as I will be testing you on this later🤓 These are “snapshot marks” The red dot is for portraits, the triangle for group shots and the red O for landscapes. If I were to set any one of these “snapshot marks” against the distance setting mark, blacklined triangle in the image below, the camera would be set for optimum focus for that particular style of shot. So we have a kind of quick hyperfocal distance scale for portraits, groups shots and landscapes. Nice. 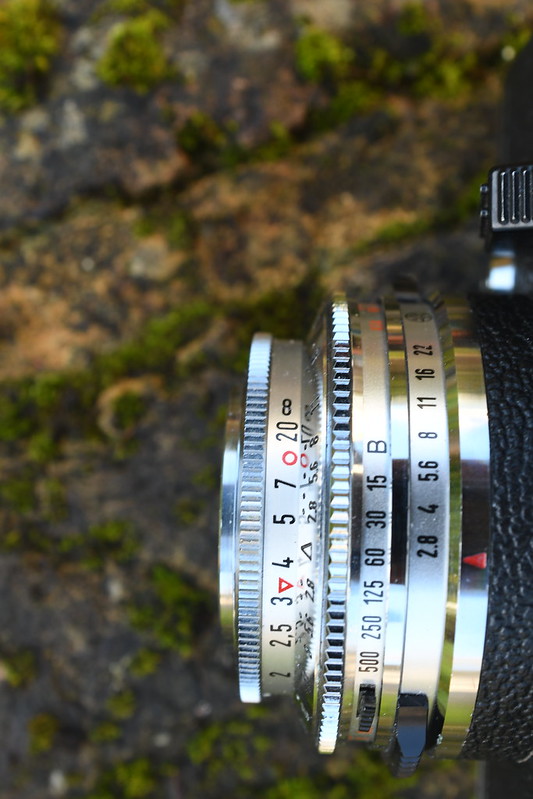 If we go around the other side of the lens we can see the film speed dial in red. 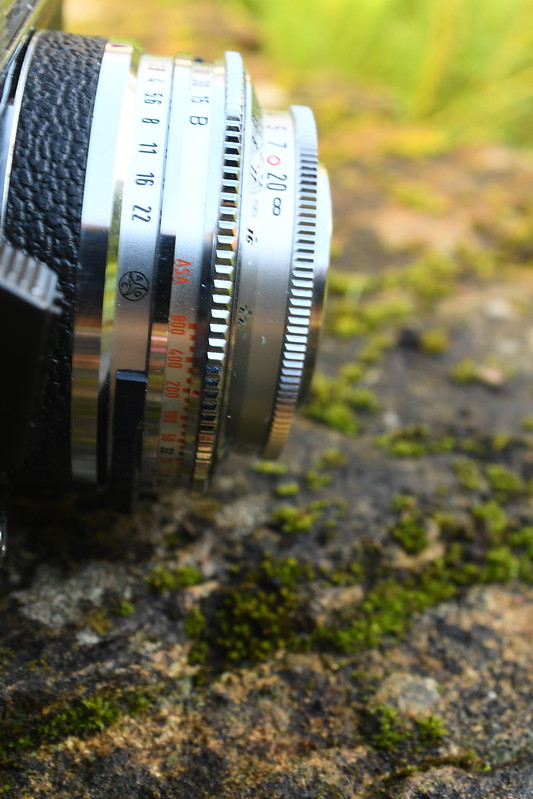 Turning to the back of the camera. Aside from the film rewind unlock on the left we have the film rapid winding lever. This has got to be one of the most silky-smooth levers I have so far encountered in the cameras I have used. It seems to float. Very nice indeed! 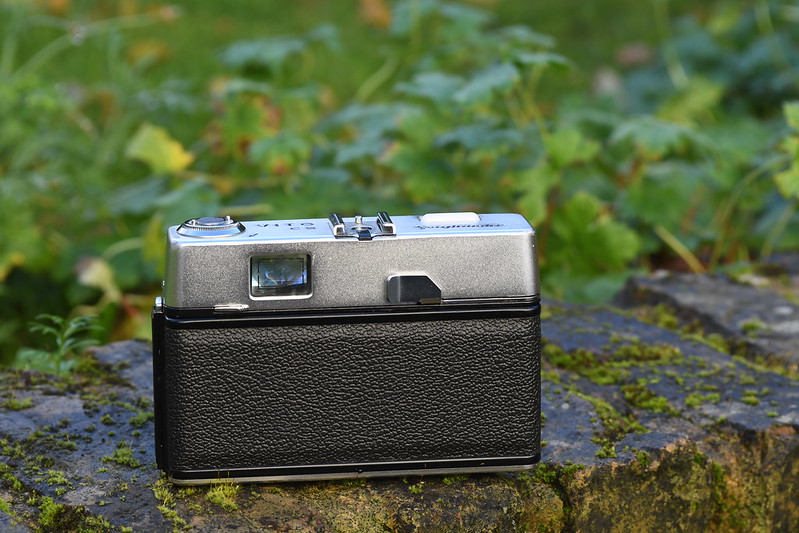 On the base of the camera we have the film counter on the left. Below the tripod socket is the green battery test button which is registered on the green stripe in the meter window on the top of the camera. Finally, the battery compartment where a P625 equivalent battery is housed. 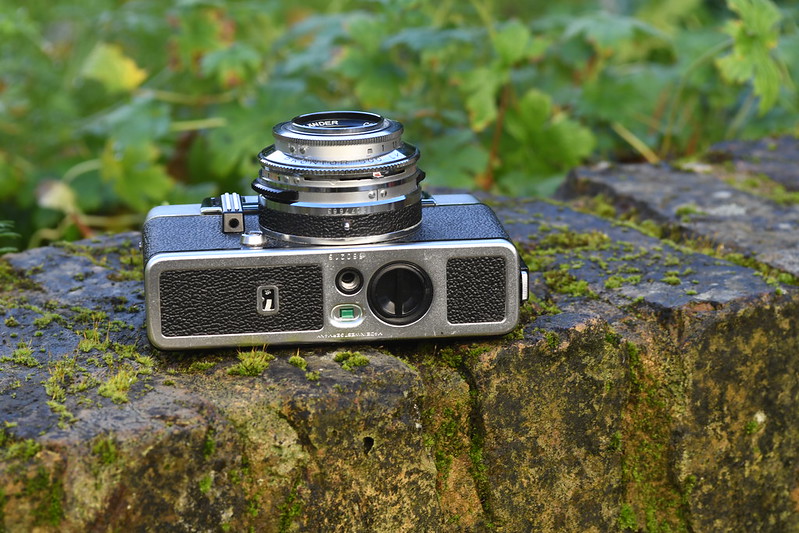 My first outing with the camera saw me walking along part of the Grand Union Canal around Berkhampstead a market town in Hertfordshire, England. It was an overcast day so I was predominantly using a 60th second shutter speed in order to keep the aperture around f11. Sadly a large proportion of the images were very overexposed. Strange considering that I checked the meter beforehand and determined it was quite accurate. I can only assume that the shutter speed of a 60th was a little slower, not an uncommon experience in these types of cameras so I’m told. 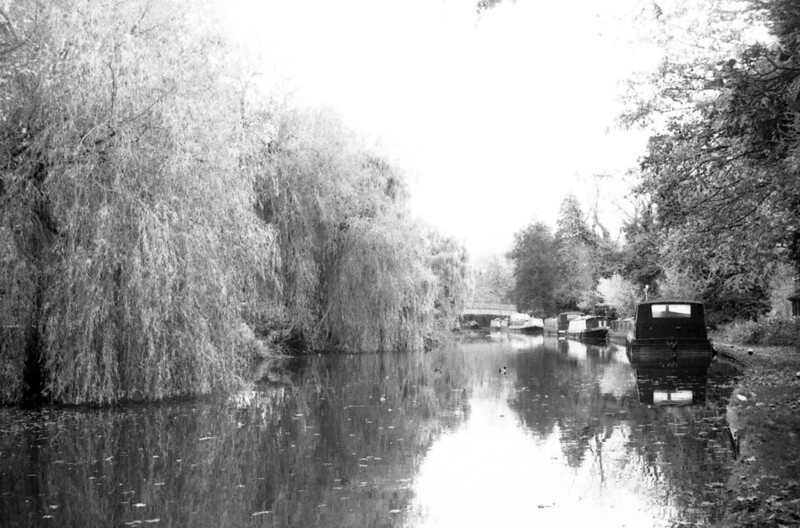 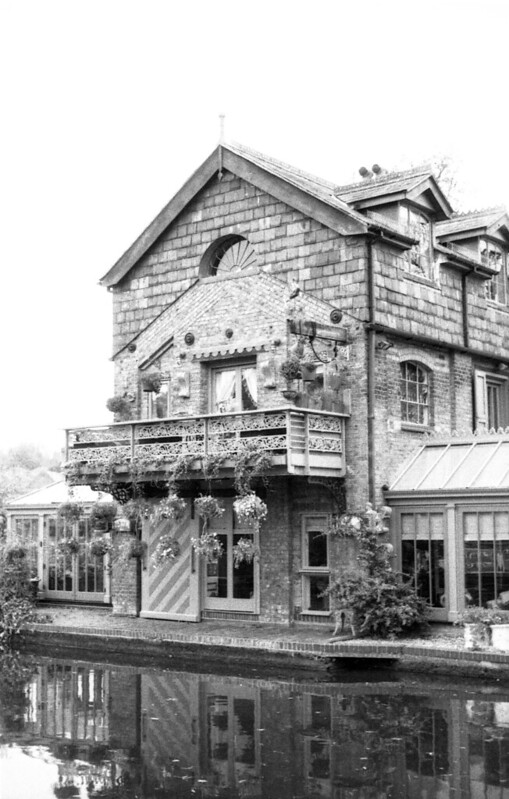 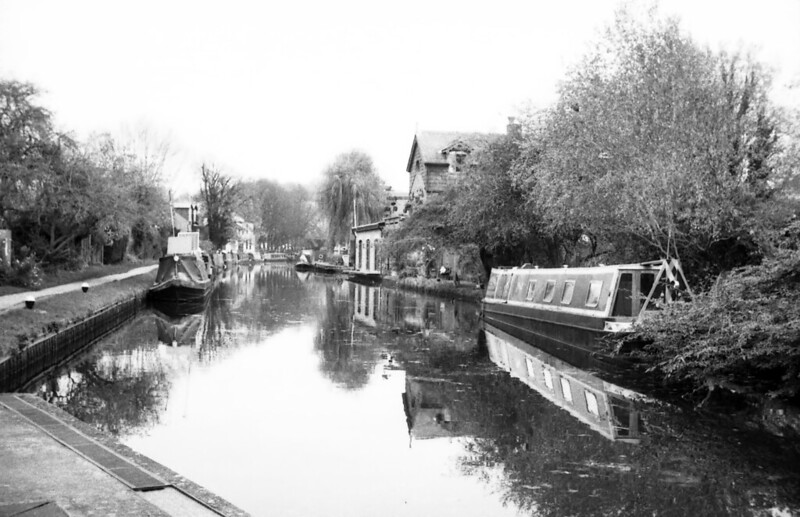 Berkhampstead also has the remains of a castle dating back to Norman times. The house pictured below is situated inside the castle grounds. 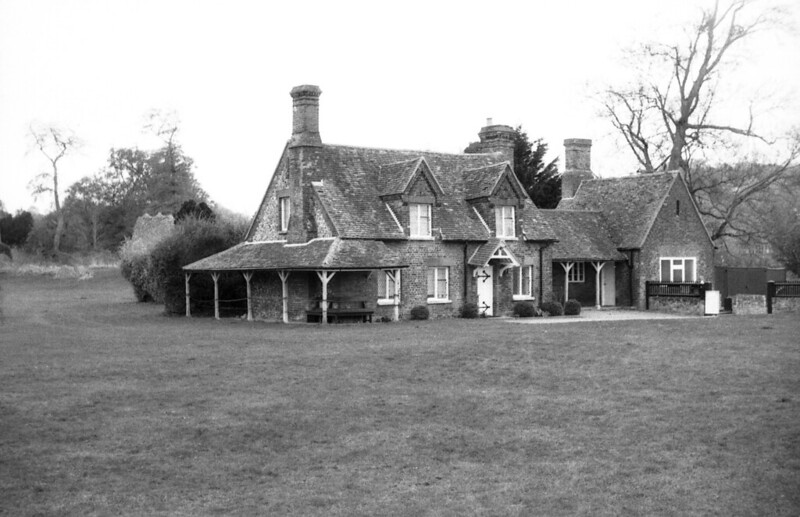 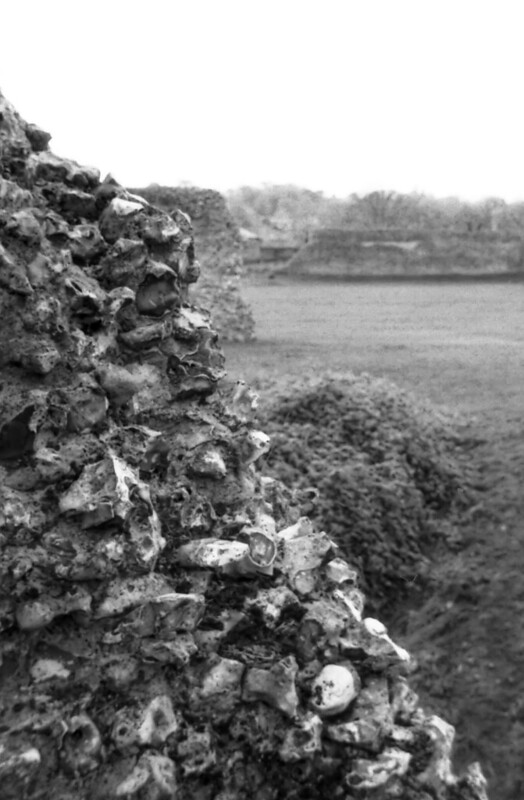 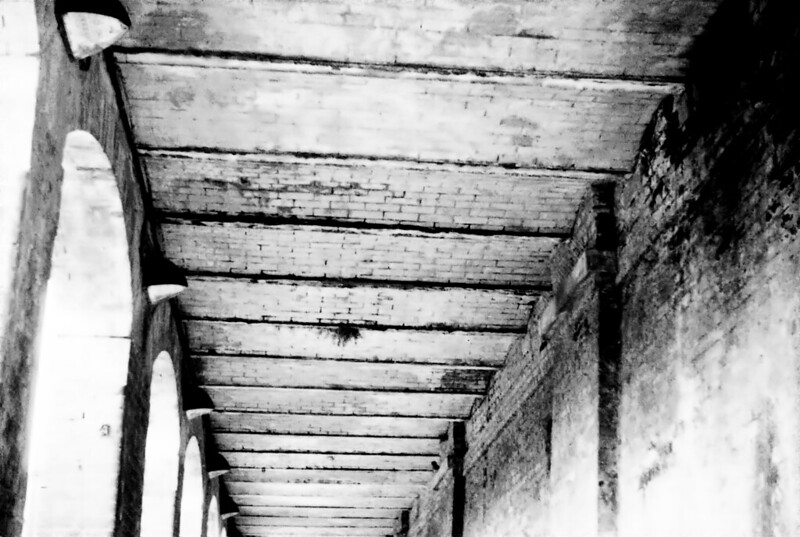 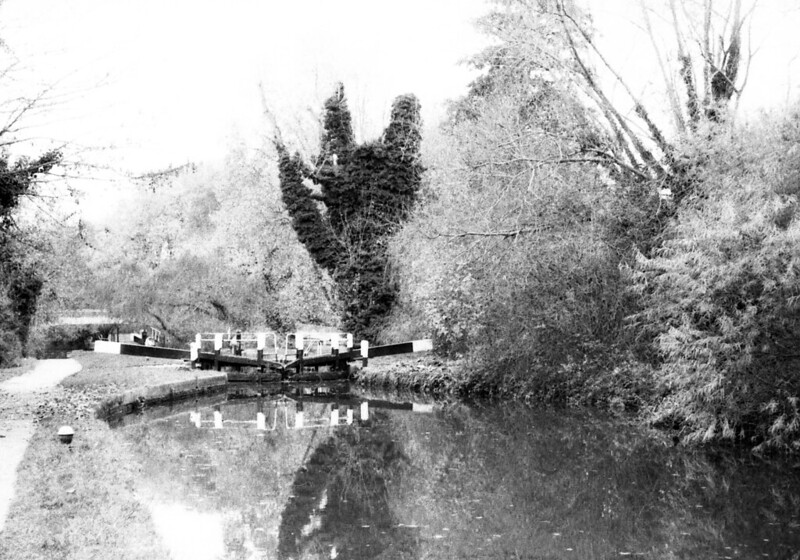 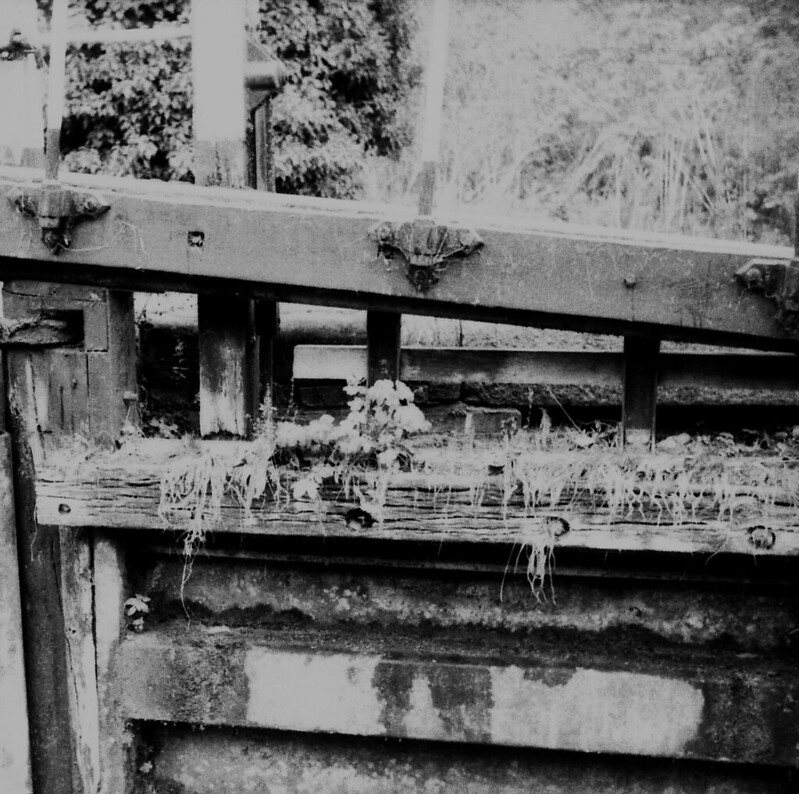 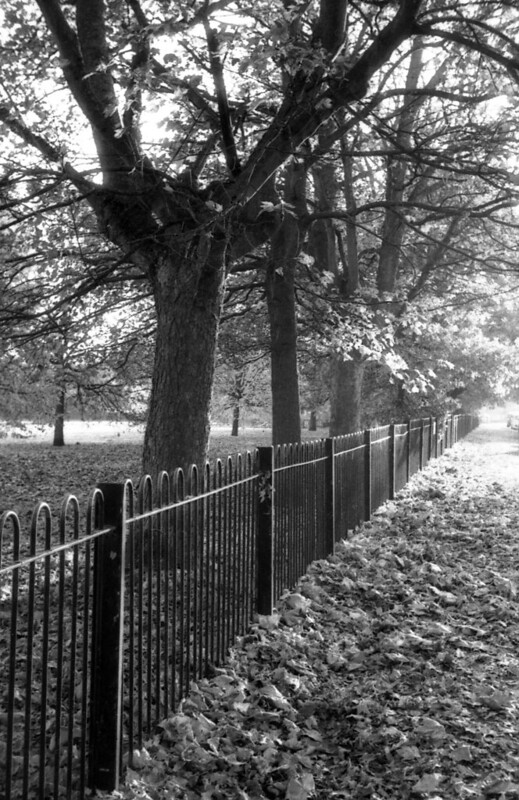 The camera weighs 1 1/4 lbs and was very comfortable in my hands during my day out with it.

As an aside, the camera overexposed the roll of Fomapan 400 by around three/four stops. It struck me while trying to rescue the images, using a combination of exposure/ levels, how infrared like some of the images looked. Interesting project to possibly explore methinks!

Will I use the camera again🤔

Yes! Why? It is light, very easy to carry around while out and about. I can use it as a point and shoot but it also has the tools for me to be more creative.

What more could you ask for?