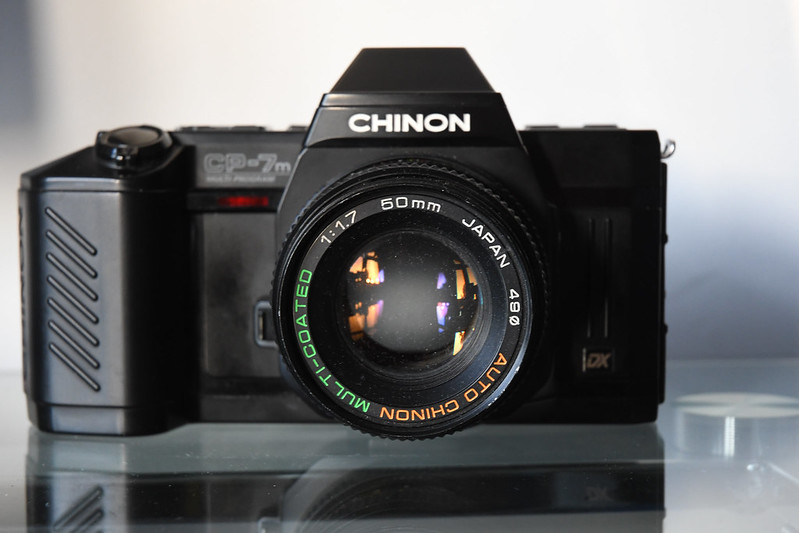 Popular photography magazine in its December 1989 issue included a round up of the best point-and -shoot cameras, here. It would appear they gave all the camera manufacturers an opportunity to advertise their ‘latest and greatest’ cameras. Included was Chinon, who in their own words:

“With more than 40 years of innovative Opto-mechatronic( is that a proper word?) technology, Chinon continues to supply the world with the latest in photographic and optical products.”

While the Chinon CP-7m may not be a point-and-shoot camera, concerning the subject of this post the article goes on to say:

“The Chinon CP-7m is a triple-program SLR that has earned the recognition and respect of professional and amateur photographers. A fully motorized, auto triple program SLR, the CP-7m accepts any K-mount lens….These fine camera stores will demonstrate tomorrow’s cameras..today”

So how does yesterday’s camera, the CP-7m, handle today?

The camera weighs just over a pound with 4 AA batteries that power all operations. Despite its plastic angular construction, I found it very comfortable to hold. Nice to see a metal lens mount! 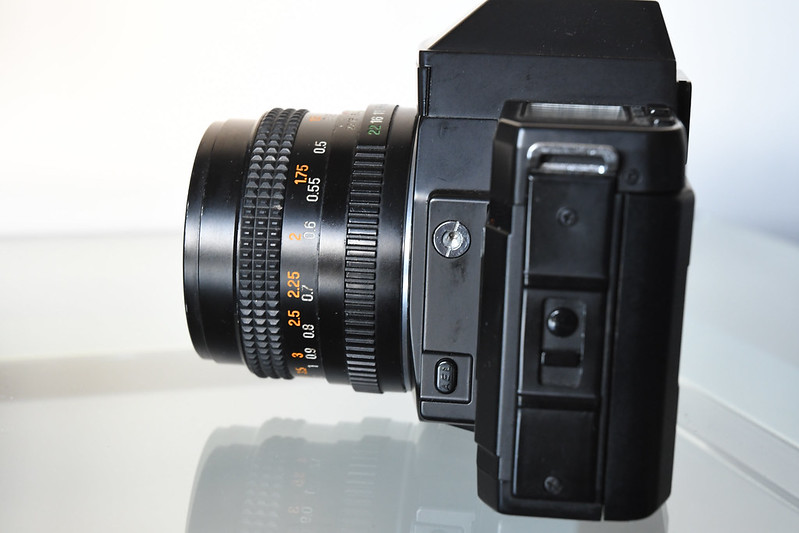 Not much to see in the front of the camera apart from the auto exposure lock button and traditional screw cable release. 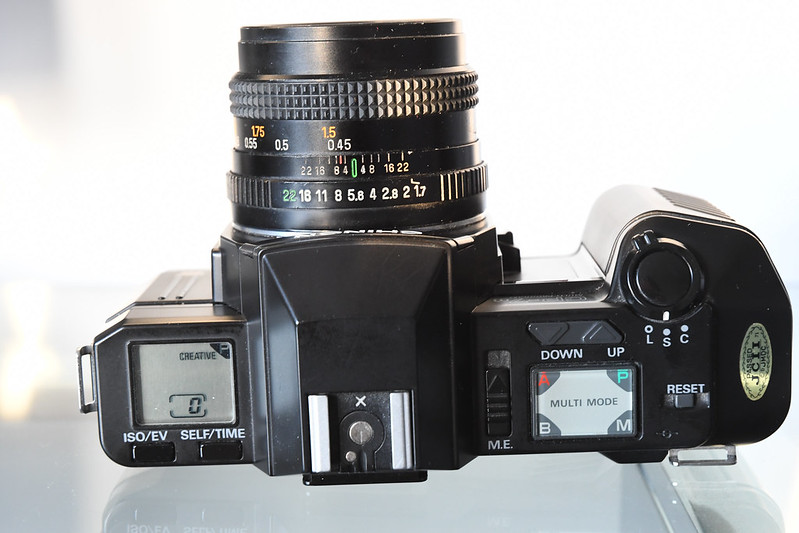 On the top plate starting on the left we have the liquid crystal display that provides information as to which shooting mode, function and shutter speed etc has been selected. Even though the camera will recognise a DX coded film, the film speed can be changed via the ISO/EV button, very useful. Exposure compensation using this button changes the ISO. The Self/Time allows for, well….self timer. However if the camera is put into Continuous shooting mode and a cable release is attached you can set the camera up to shoot at your chosen interval up to 59 minutes. So if I want to take an image every 20 seconds for 59 minutes I can. I tried mine out and it did shoot for a couple of shots but then stopped???

Moving over to the right hand side of the camera, we can see the shutter actuation button with Lock, Single and Continuous shooting mode. Below that is a Reset button which takes the camera back to Program mode. To the left of the Reset button is the program mode selector pad which allows you to cycle through Aperture Priority, Program, Metered Manual Mode and finally Bulb mode. In program mode there are a further two options to choose from. Action is basically a Shutter speed priority mode where the camera will select higher shutter speeds to capture action. Then another press of the pad on the Program mode brings up Creative mode which is an Aperture Priority mode with the camera selecting both aperture and shutter speed for you to cycle through. Above the pad are the up/down buttons to select values for the functions of the camera. 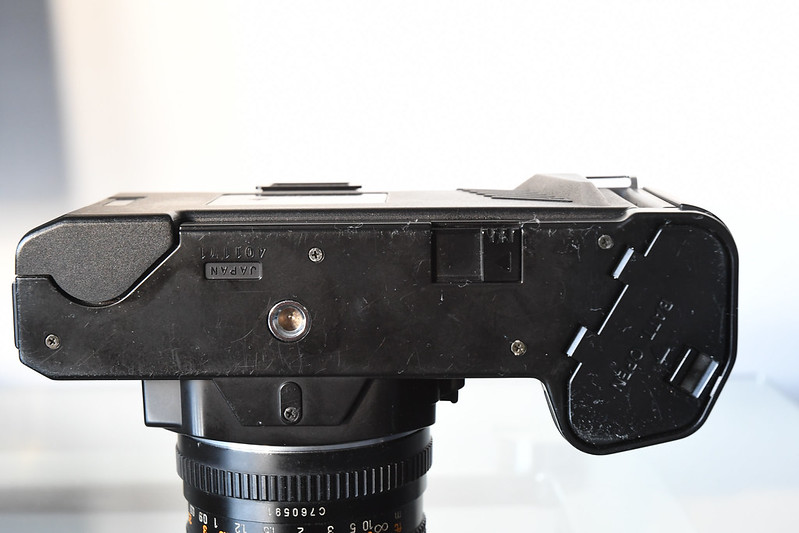 The bottom of the camera has the film rewind, hidden by the slide door to prevent accidental actuation.

That’s about it. Nothing really that distinguishes it from other cameras of the time. But what’s it like to use? 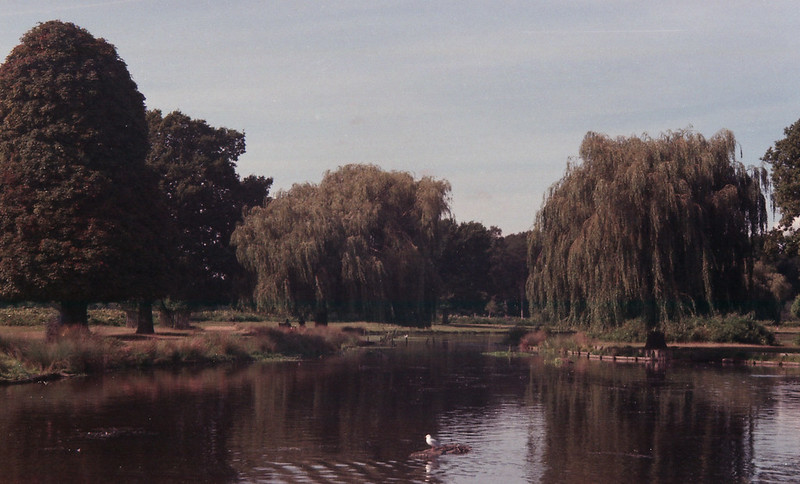 The centre weighted meter did a really good job, I’m really pleased with the results. 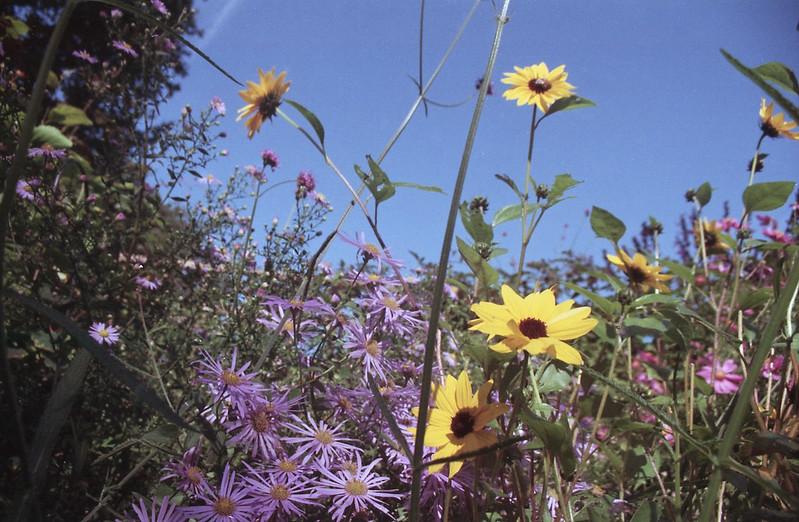 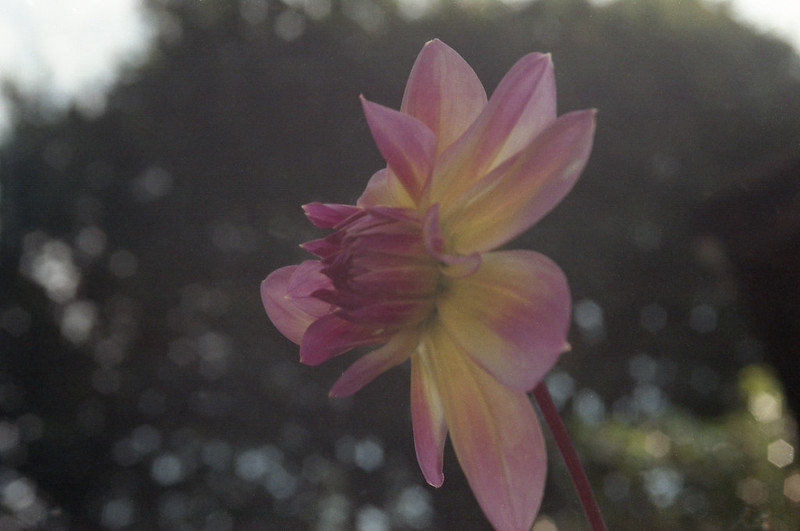 But wait a minute! (Sound of a car screeching to a halt) What was that M.E button on the top plate to the left of the mode selection pad? Perhaps this is the hidden gem that lifts this camera above its peers. The Multiple Exposure button. This is not new by any means. With most manual cameras you can accomplish this by holding the film rewind release and carefully wind the shutter on. But with the Chinon CP-7m, sliding the M.E button upwards, the camera disengages the wind on mechanism allowing you to take as many images as you want on a single frame of film. Of course your on your own with regards to working out exposure but think of the creative possibilities. I have to try this! 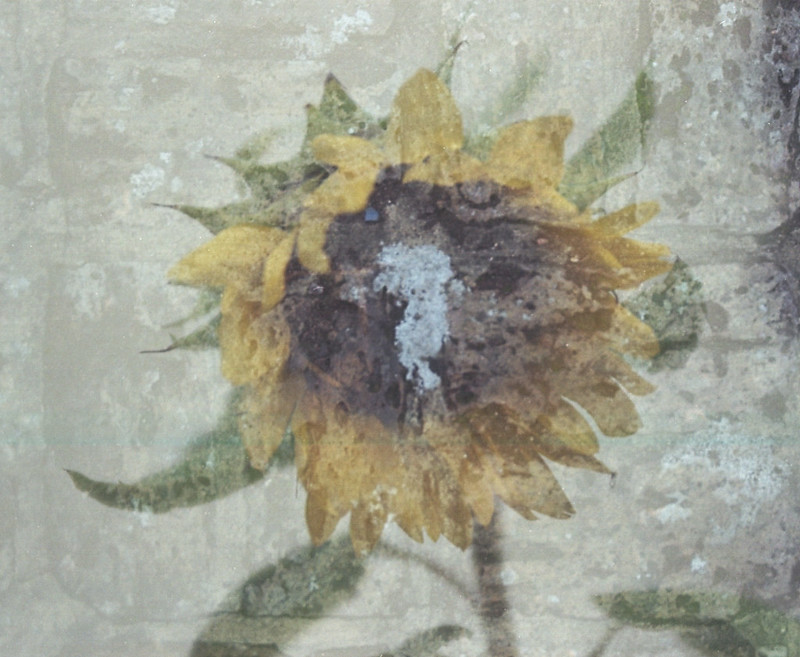 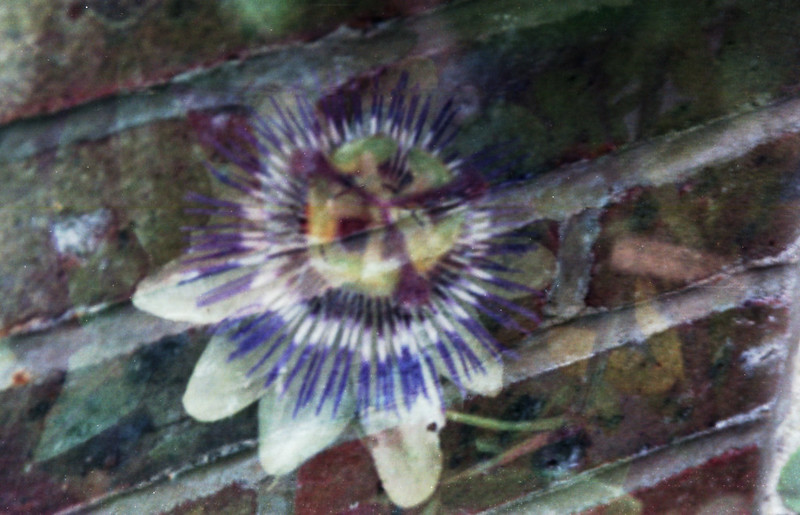 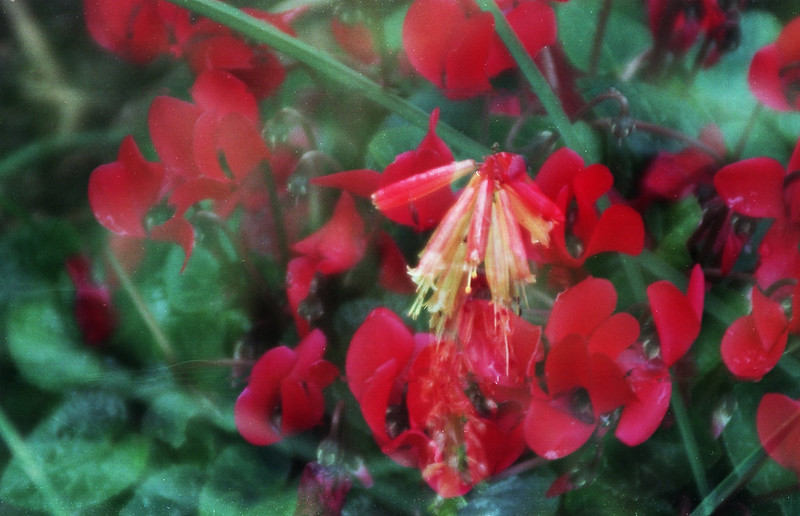 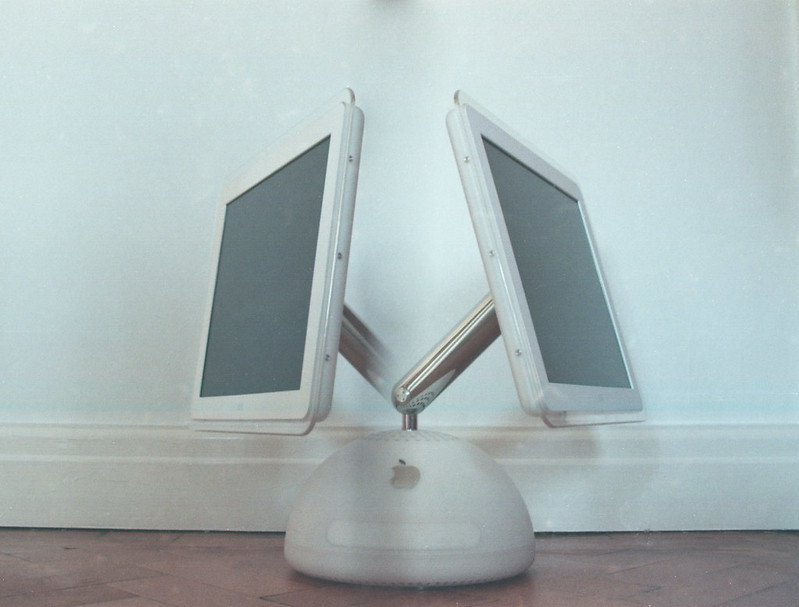 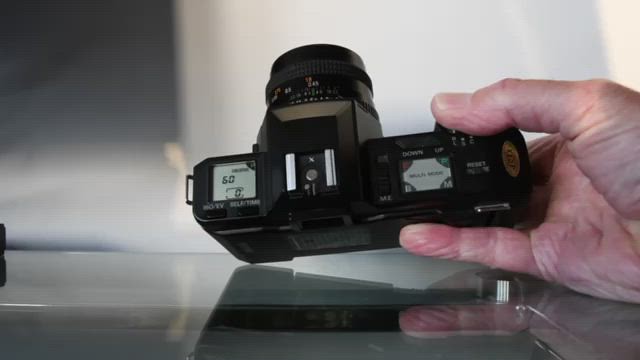 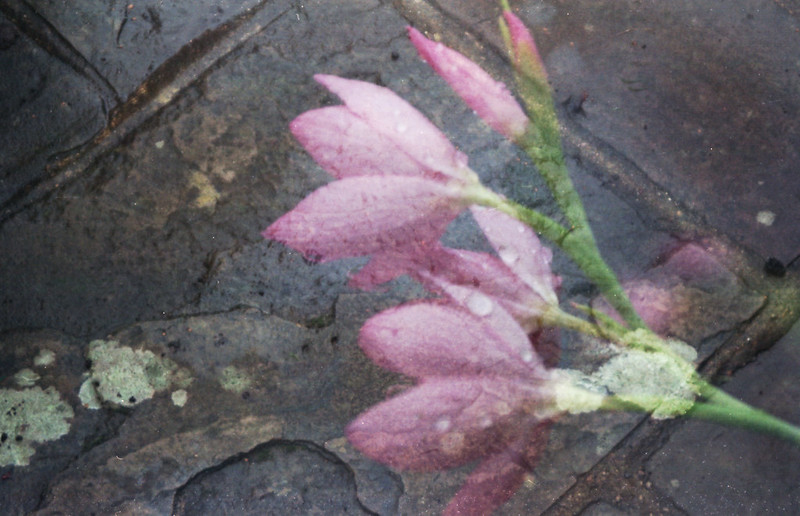 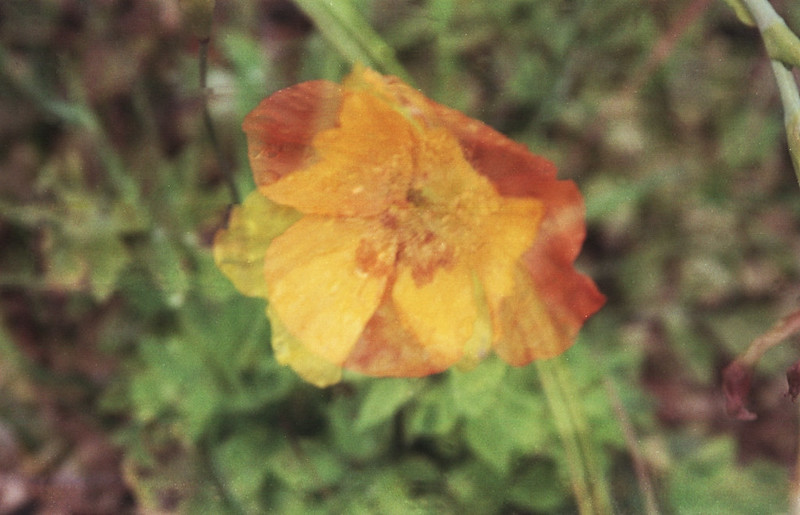 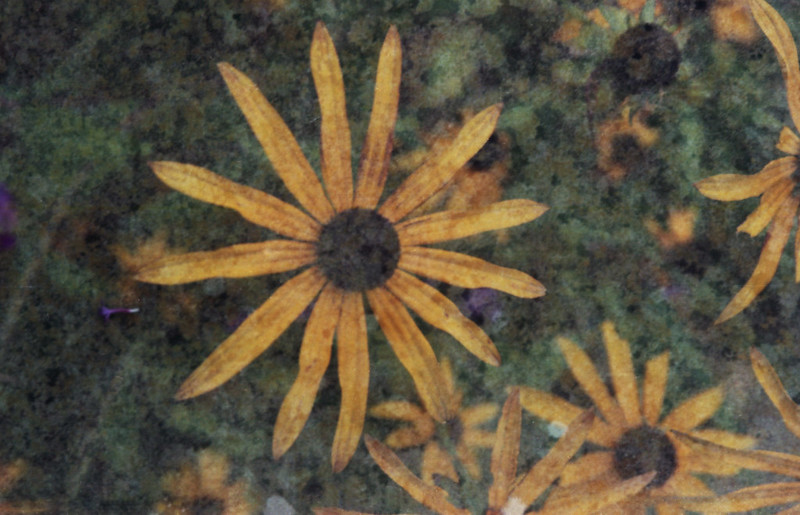 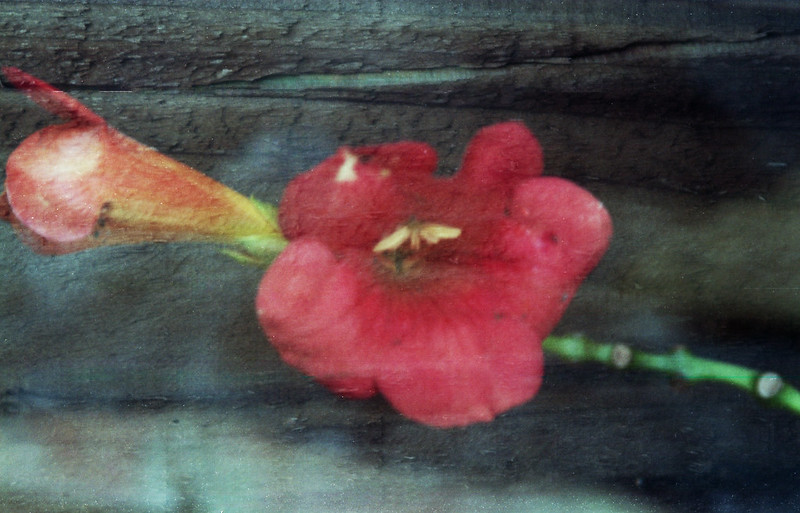 While reviewing the results from my double exposure fest a thought occurred to M.E. This camera could be my go to camera for when I want to do some multiple exposures. It makes it so much easier to do. In addition, with its intervalometer astro/night time photography becomes more accessible. So while at first sight it appears as a rather ‘plain jane’ of a camera, in actuality it’s more of a ‘Cinderella shall go to the ball’ of a camera?