Do people really talk like that? Having spoken to the original owner of the camera that is now mine, I can indeed testify to the fact that the Canon FX had brought many years of delightful experiences. But would it continue to do so?

Weighting 2lbs with the 50mm 1.8 FL lens, it is a nice looking, but more importantly, comfortable camera to hold! 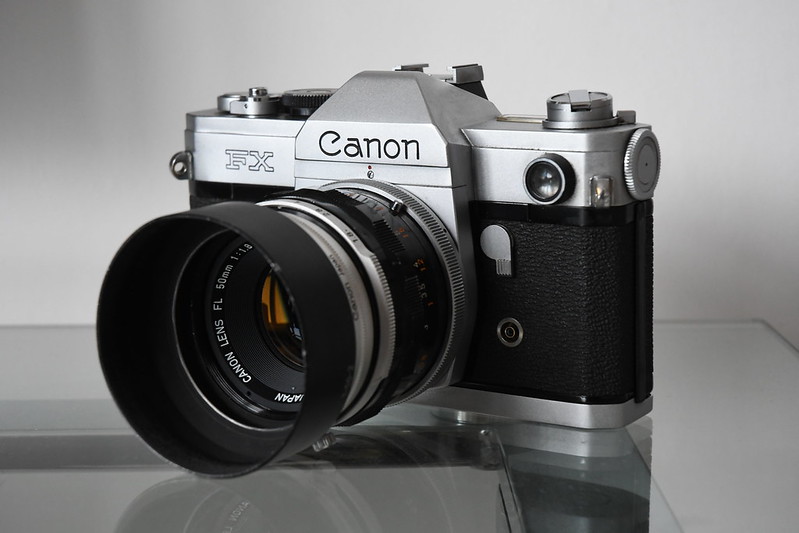 Released in 1964 it was the first to have the new FL lens bayonet mount. With the previous R lens mount the apeture was left at its lowest f number, by the user, so that the viewfinder was left as bright as possible when composing your image and only manually ‘closed’ down prior to actually taking the picture. With the new FL lens mount this was ‘automated’. Now you could chose the f stop before composing your picture, as the viewfinder would remain bright and only ‘close’ when pressing the shutter button. 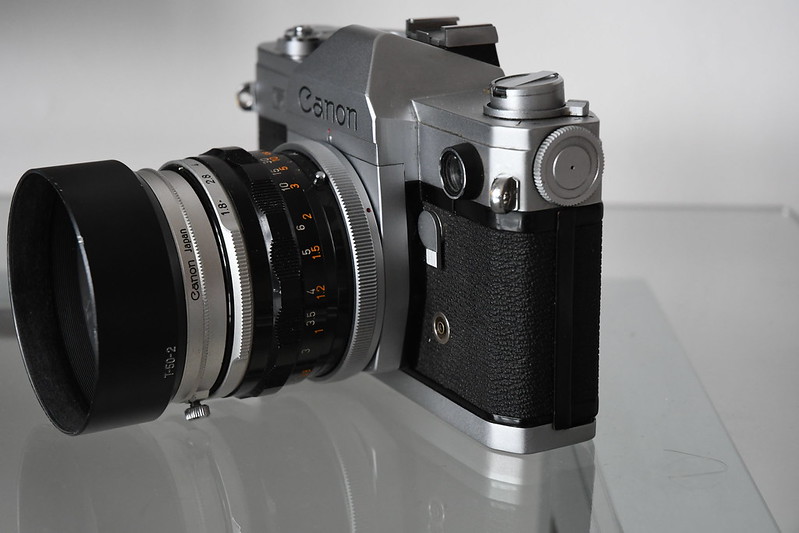 The FX has an external light meter, the black protrusion just to the left of the camera strap lug in the image above. It is powered by a single type 625 equivalent battery, housed in the chamber to the right of the meter. Note:- It can be a bit fiddly to unscrew and then rescrew the battery cover.

In the picture below and on the left, you can see the meter needle and scale. How is the meter used? That depends on your preference.

Shutter Priority mode: Select your desired shutter speed; move the aperture ring to the f stop indicated by the meter scale. ( I hope your following this, as you will be tested at the end) 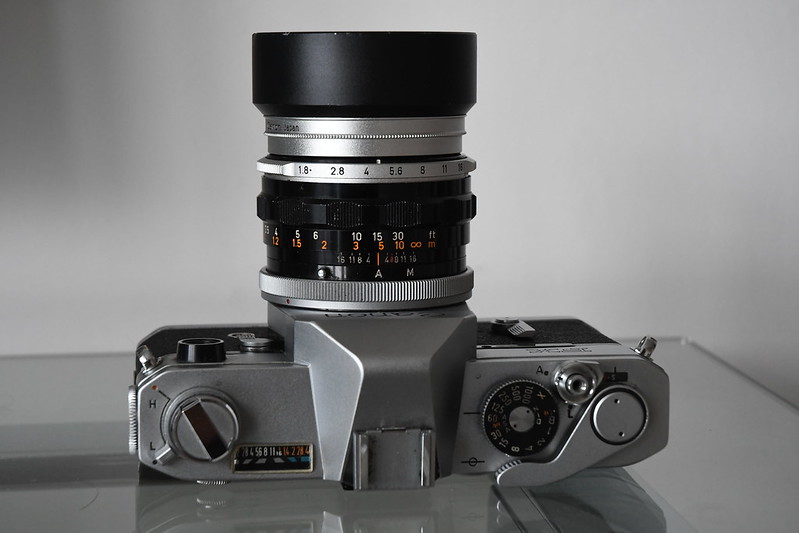 A very sensible battery check and ability to turn off the light meter is included on the Canon FX. 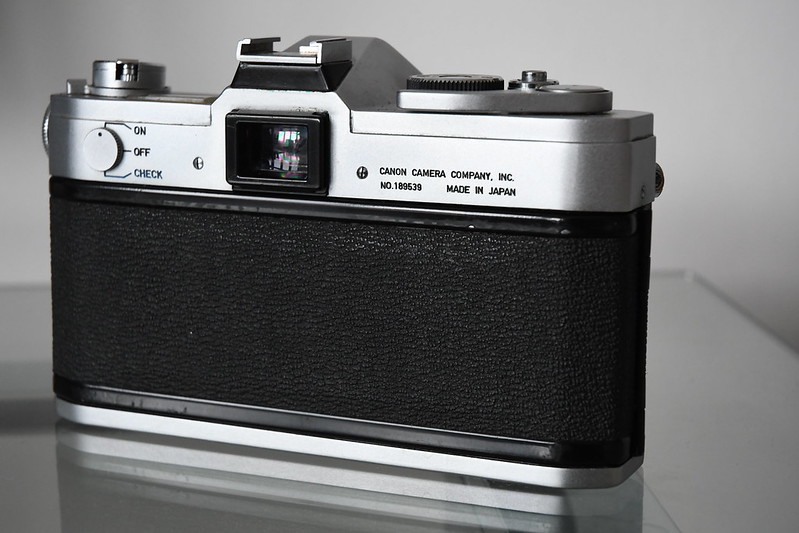 The attention to detail is evident even on the base of the camera that houses the film chamber lock, tripod mount and film rewind release button. 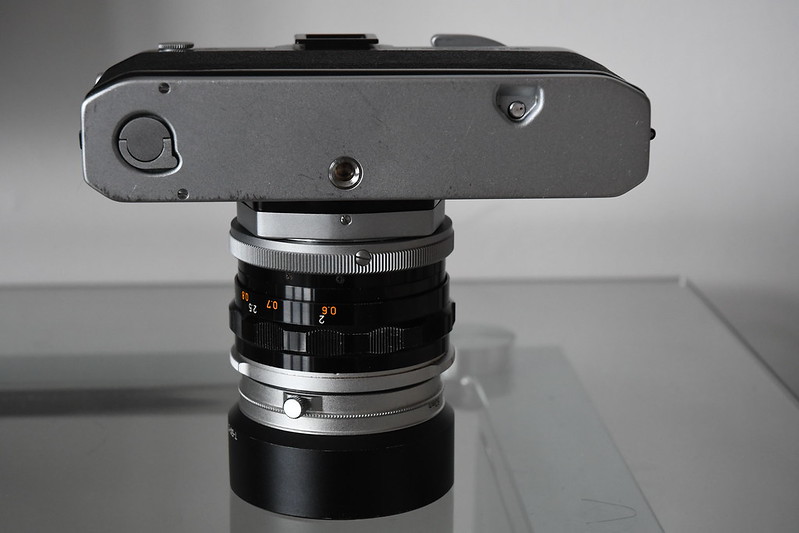 I was really pleased to have finally acquired a working copy of this camera. However not all was well as you will see form watching the brief video below. 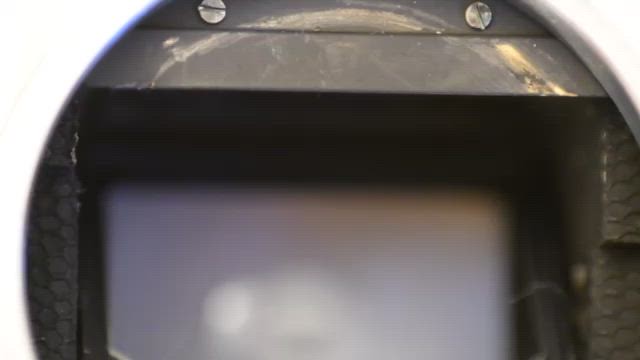 The mirror was not moving completely out of the way quickly enough. The last 5mm of its journey up would reduce the exposure of the film and produce a dark band on one side of the image. There was only one recourse, the baseplate had to be taken off and I would have to investigate😕 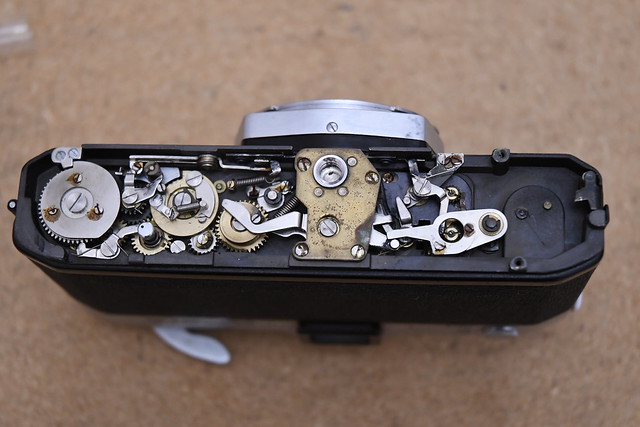 Nothing seemed obviously out of place as far as I could tell, apart from some gunk on some of the armatures. I needed to take the tripod mount off to see a little further! 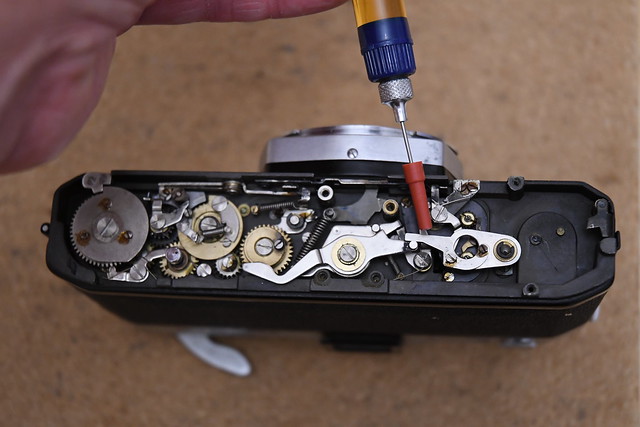 I elected to put a minuscule amount of lubricant onto some of the mechanisms. 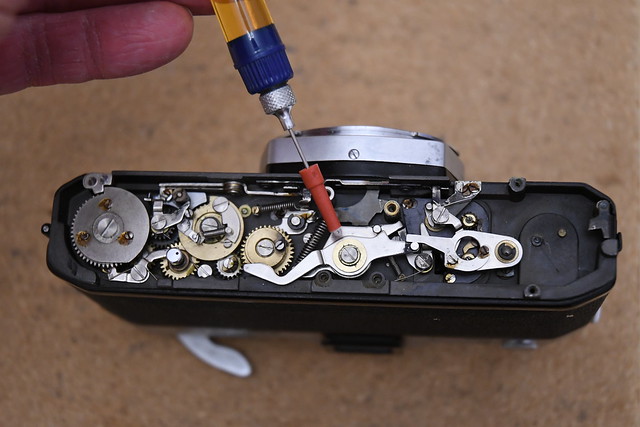 The mirror mechanism in the shutter box too received some attention too. 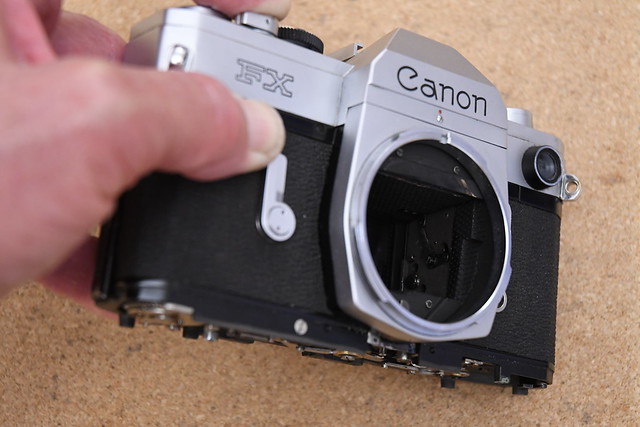 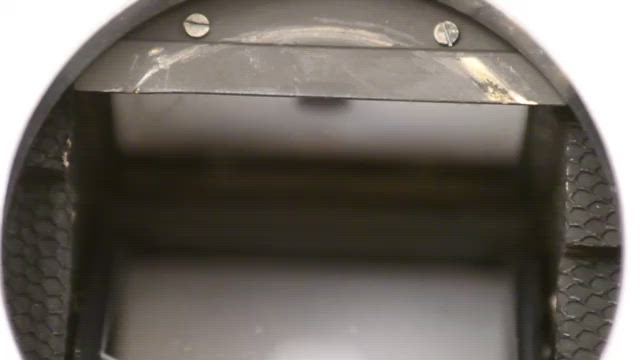 Success🥳 Or was it? Only one way to find out! 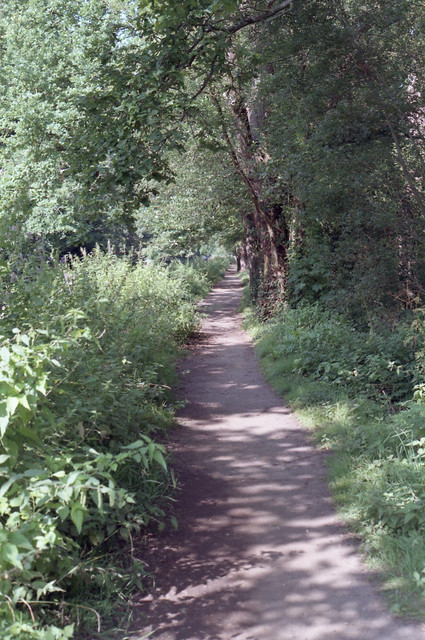 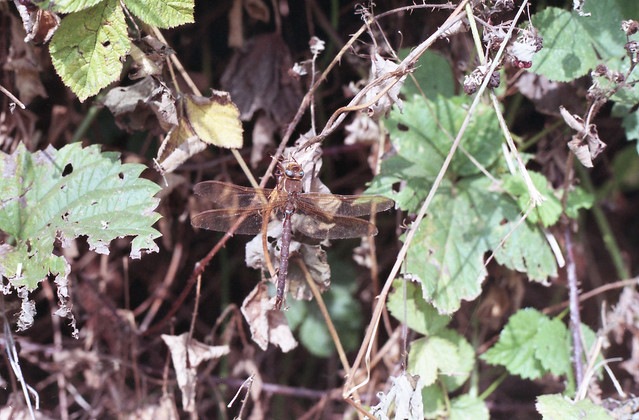 The bridge received a well deserved black and white treatment. 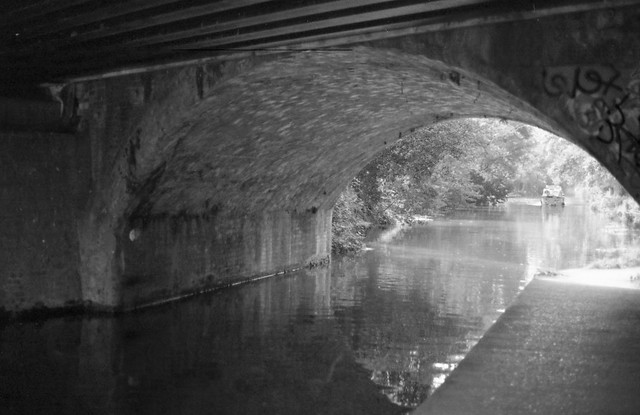 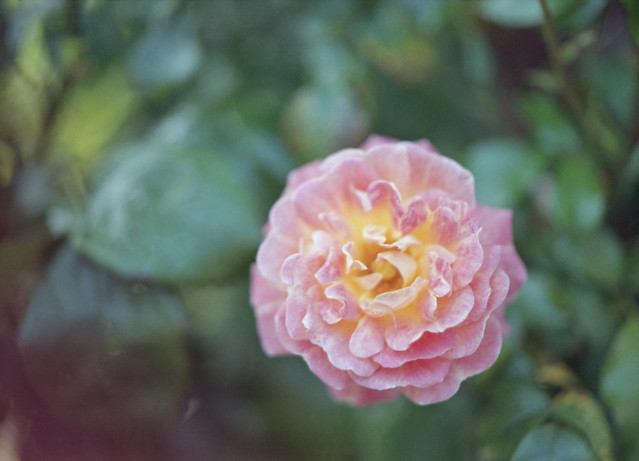 I was so pleased that I now had a working camera that I put another roll of film through it. Kodak Gold Expired 1995 – time for the chinos and slick back hair! 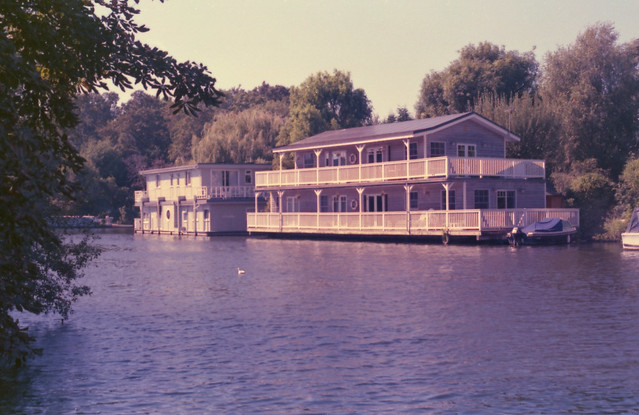 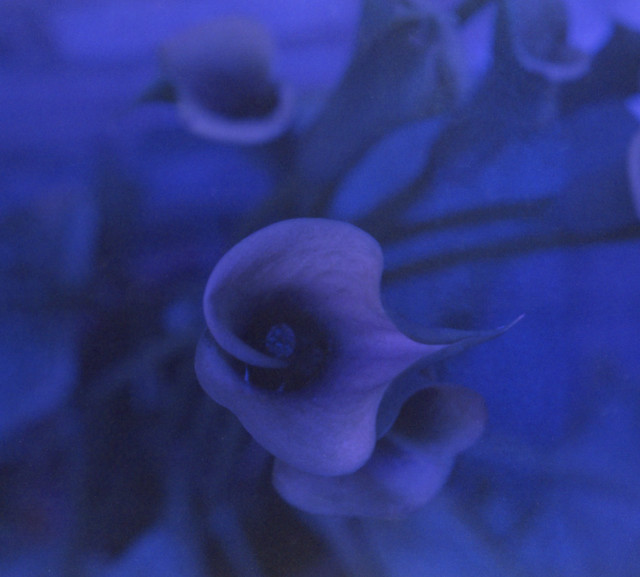 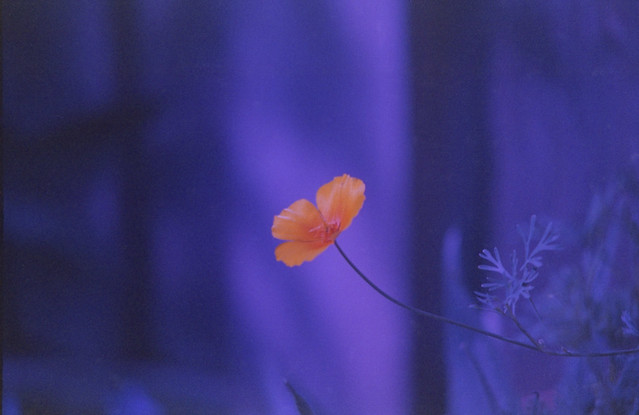 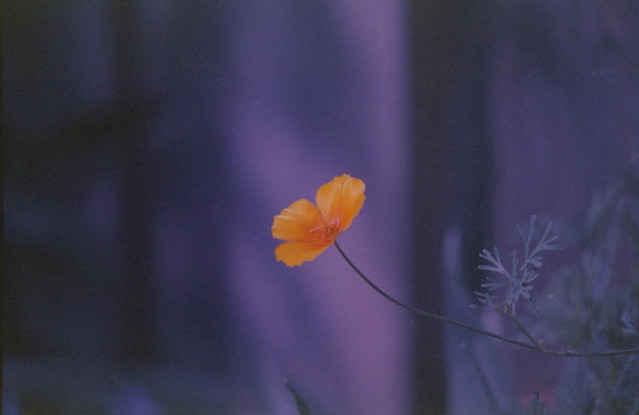 I want to use this camera again as I seemed to have missed the focus on a higher than normal number of photos I took with both films. I have a nice looking 135mm FL lens to try out that came with this camera. I also have the original owners receipt for his purchase of this camera second hand, £35 in 1973. I wonder what that would be equivalent to now?

As you can probably tell by the tone of this blog I like this camera, a lot. Having had an issue and resolved it, means that somehow there is a connection. Will the Canon FX continue to “delight”? Let’s see.