This is the fourth iteration of the double digit Om series of cameras from Olympus, it starting with the highly regarded OM10. Also known as the OM 40 PC it was designed to appeal to a variety of users. 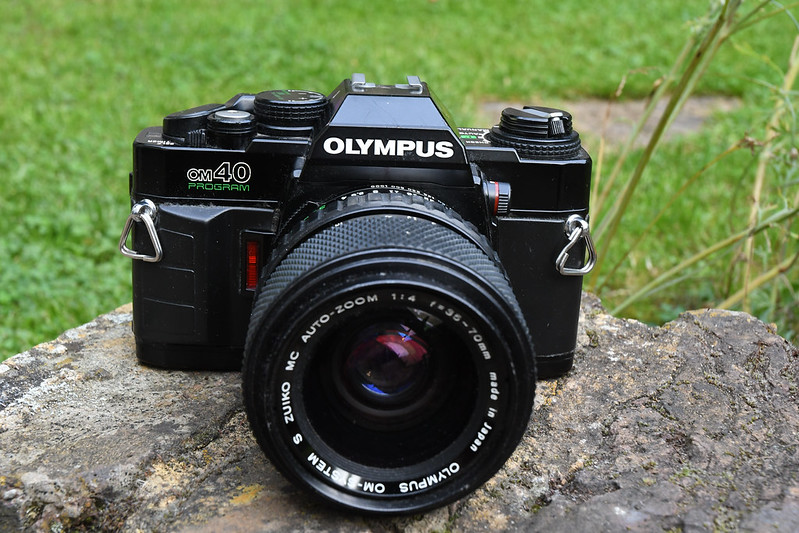 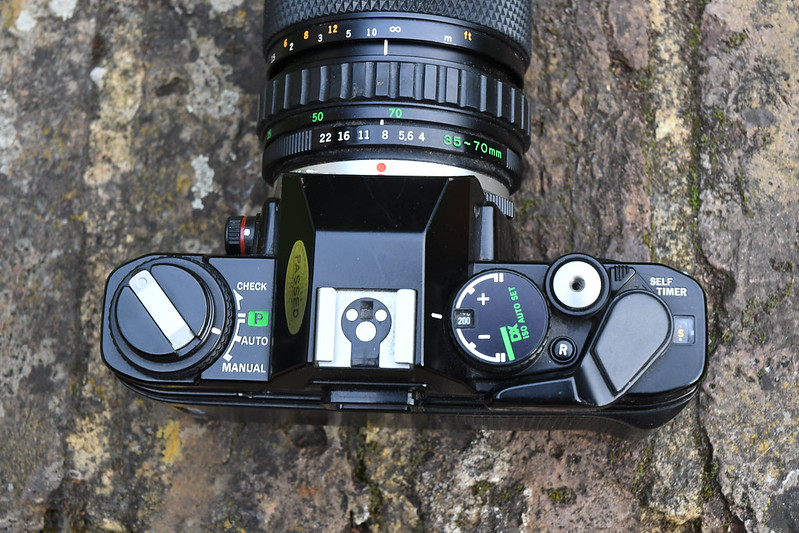 On the top right of the camera is the film speed selector which has a manually selectable range from 25-3200 and DX. This is a great feature for those of us who like to ‘push’ or ‘pull’ their films. The same dial offers exposure compensation. Double nice! 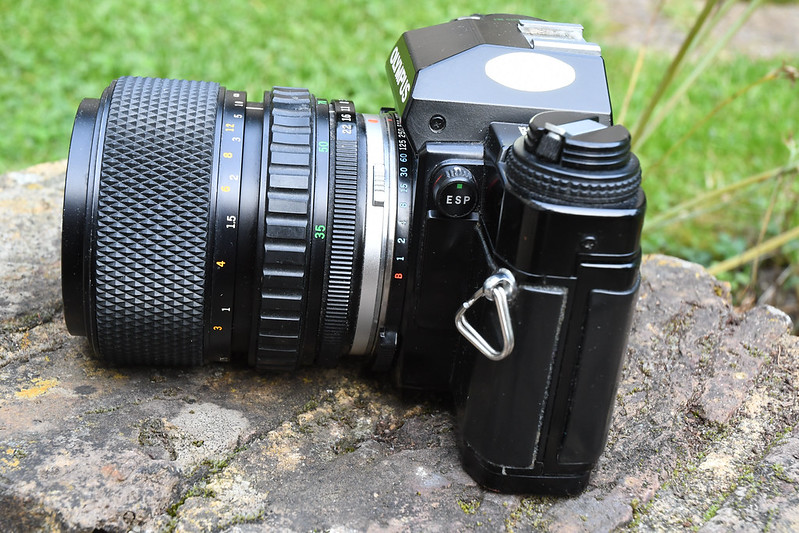 The dial marked ESP is the exposure mode dial. When the green dot lines up with a white dot you are in Electro-Selective Pattern exposure mode. There is a sensor on the eyepiece that taps into the ocular nerve and in turn the cerebral cortex of your brain. Then through a series of computer algorithms the OM 40 will calculate what image you want. Then as the manual relates –

“By simply depressing the shutter release, you can produce a photograph in which the subject will appear as you see it with your eyes.”

Isn’t that great! Sadly that is just a figment of my imagination, except for the quote from the manual. Seriously, ESP is essentially a matrix metering mode. Doesn’t sound as grandiose now.

“It measures the brightness of the subject as the light registers on the film during actual exposure.”

With its sculpted integral grip, even the back of this camera looks good! Though a lot of plastic is evident in its construction, the OM40 is very nice to hold and feels very balanced in the hand. 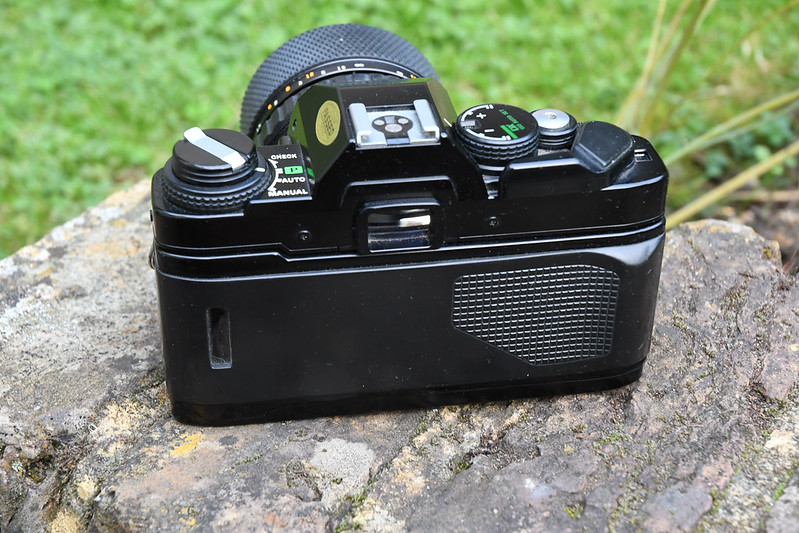 So where do I go to test out this camera. To the bike-mobile! (cue the 1966 Batman transition music) As can be seen from the level of rust I really need to get out with it more often (as well as take more care of it)

Since I was going to be on my bike I chose the Zuiko 35-70mm f4 zoom. As can be seen in the picture of the bike, the lens is a little soft around f 5.6-8 which is where a left it for many of my images. This is easily rectified in post processing on the computer, but not so if I were to make a direct print from the negative in the darkroom (note to self). 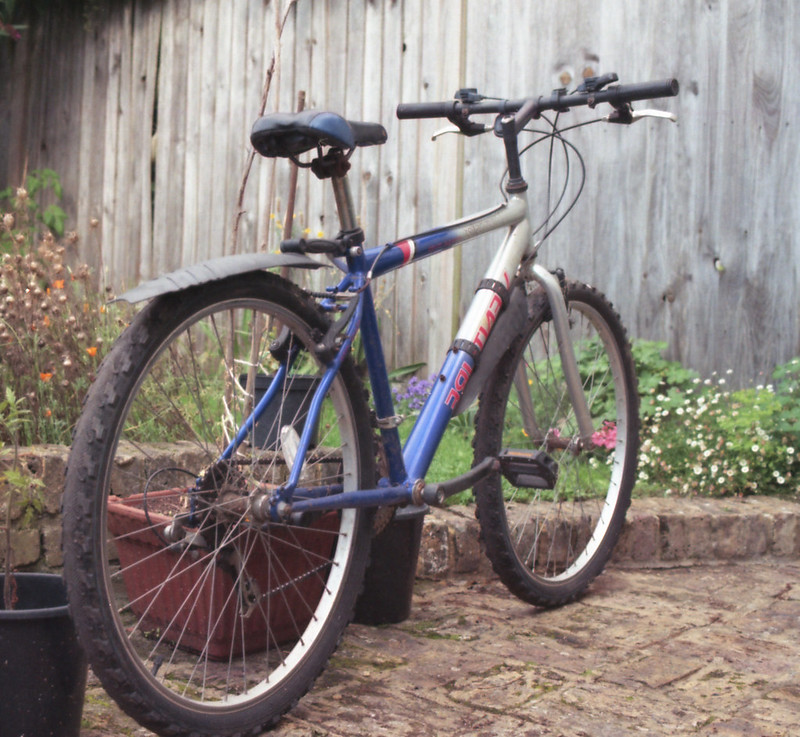 Not far away from where I live there are a series of tracks for both pedestrians and bikes. Some of these tracks follow the path of a light railway built at the turn of the 1900’s and now long dismantled. The railway was erected to transport materials to the Long Grove Asylum which was being built. The Hospitals comprised a series of pioneering institutions that served through two world wars, malaria research and even music therapy untill it was eventually closed in 1997. The land was the redeveloped and while there is a lot of housing there is also a lot of open spaces, like the one pictured below.

Becuase I was in shade looking out at a bright scene, Aperture Priority mode and ESP were selected. I’m impressed with the level of detail in both the shadows and highlights. ☺️ 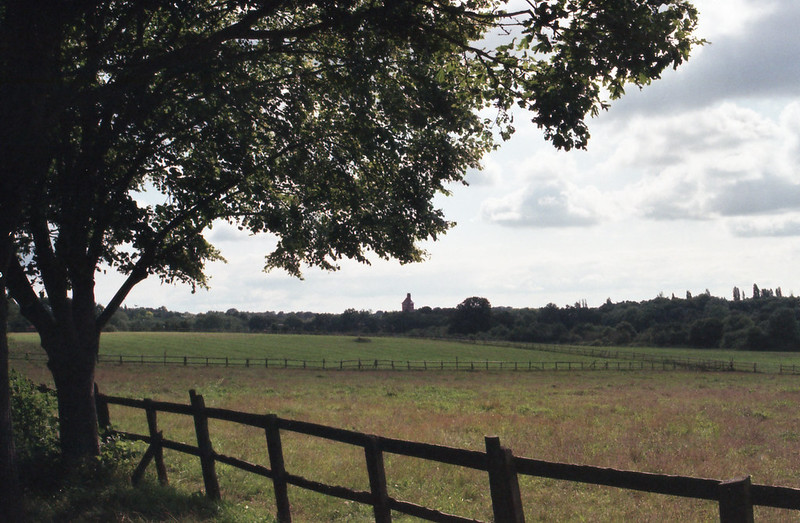 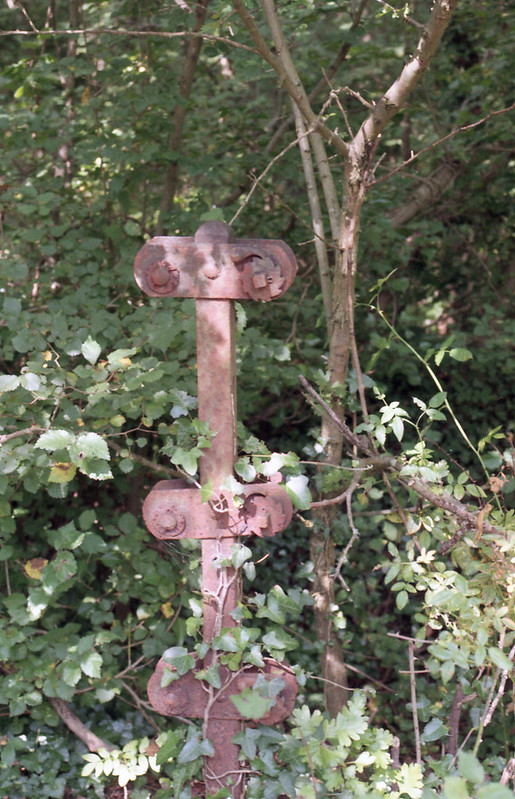 Signs of the old railway are dotted along the paths I cycled. 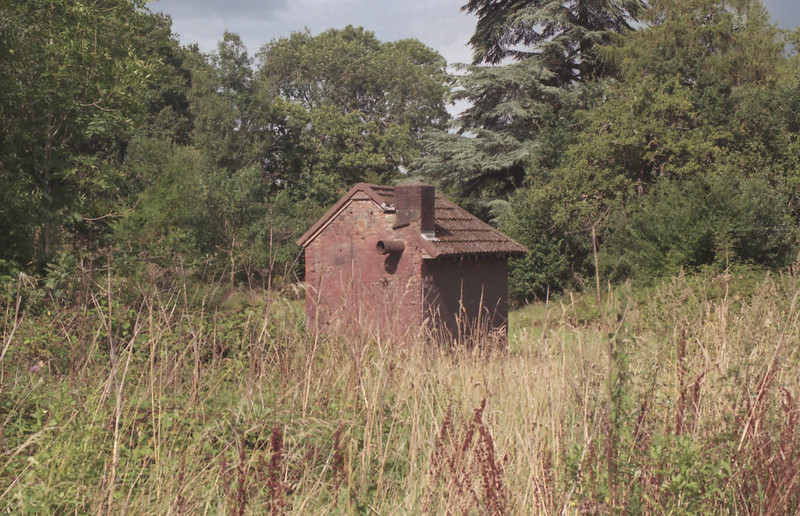 I thought the photo above would make a nice black and white conversion. What do you think? 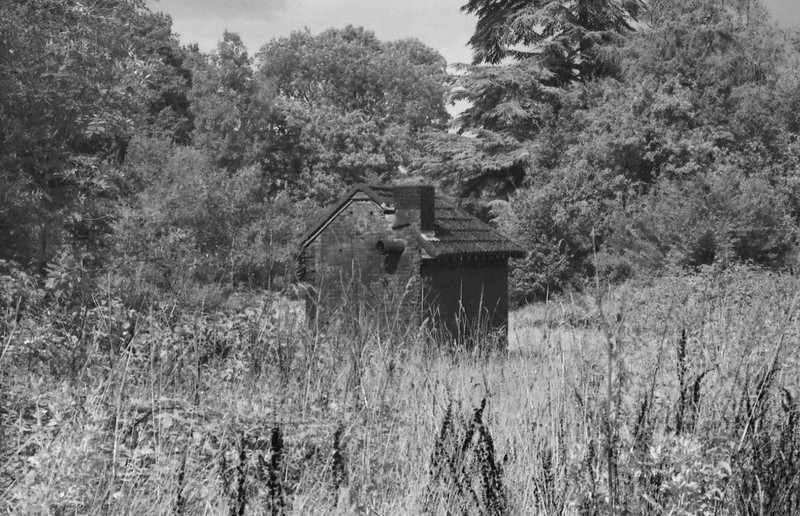 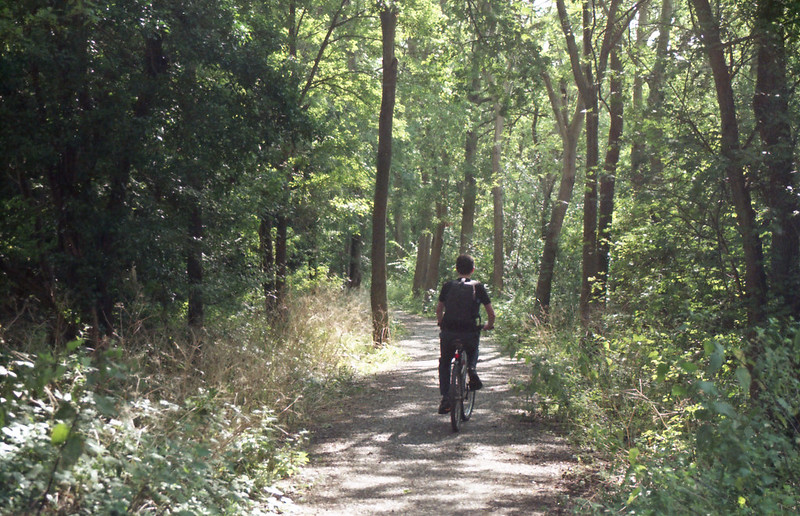 The son, my companion for this ride. 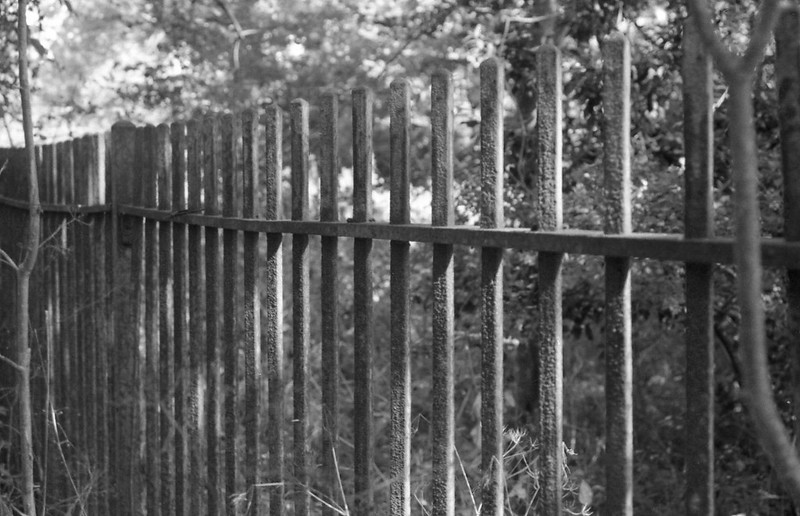 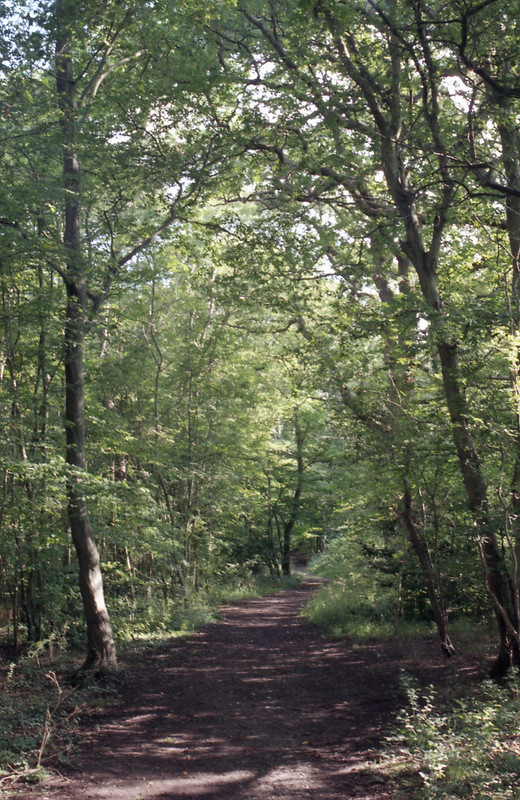 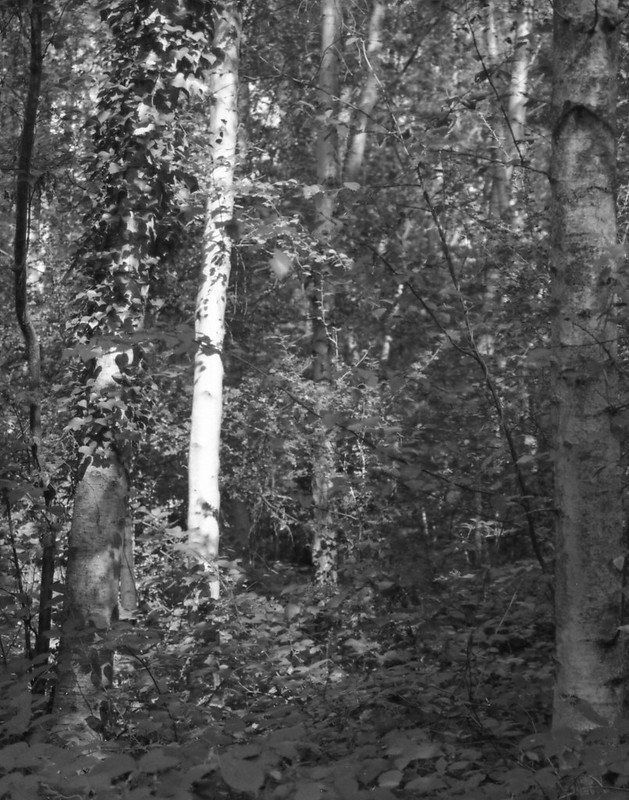 Again another example of the cameras ability to get the exposure correct, also a good candidate for the black and white treatment. 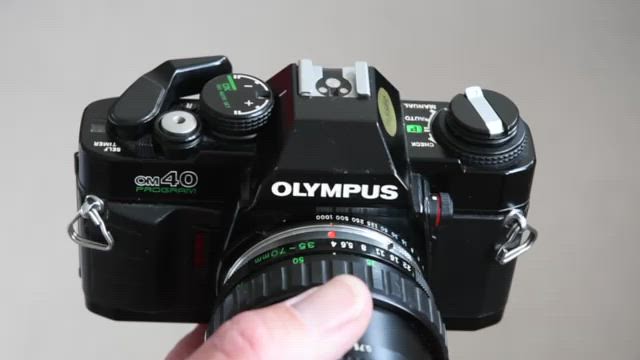 I was only able to try a small fraction of the cameras features on my ride out with it. I would not hesitate to recommend trying the OM40. It comes from a line of successful cameras that are light, compact but laden with features that will keep most happy. But don’t take my word give one a try!

One thought on “On My Bike with an Olympus OM40”